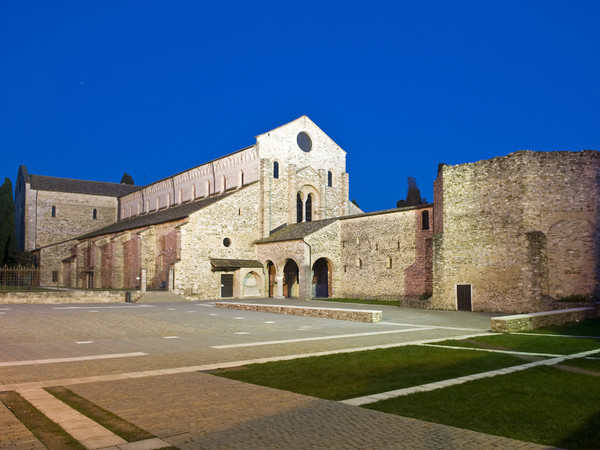 The Basilica of Aquileia. Photo by © Gianluca Baronchelli

Replica of the Holy Sepulchre

Torriani Chapel
Aquileia’s basilica is an extraordinary architectural design. Its essential lines embody the vision of Poppo (bishop/patriarch from 1019–42), who consecrated it in 1031. But its origins stretch back at least to the late 4th century, when in Bishop Cromazio’s time, the basilica was virtually as big as it is now, apart from the transept and apse with underlying crypt. Significant building work was done in the early 9th century, when Patriarch Maxentius added the portico (originally on two floors) to link it to the Pagan church, and the two projecting structures of the transept and the apse. Poppo’s restructuring project in the 11th century included the reconstruction of both the facade, with the central two-light window, and the apse, with its stupendous fresco cycle. The internal ten-column colonnades were given new capitals. Further work was done after the 1348 earthquake. In 1909, Poppo’s floor was removed up to the level of the presbytery to reveal the mosaic floor from the Constantine complex about a metre below.