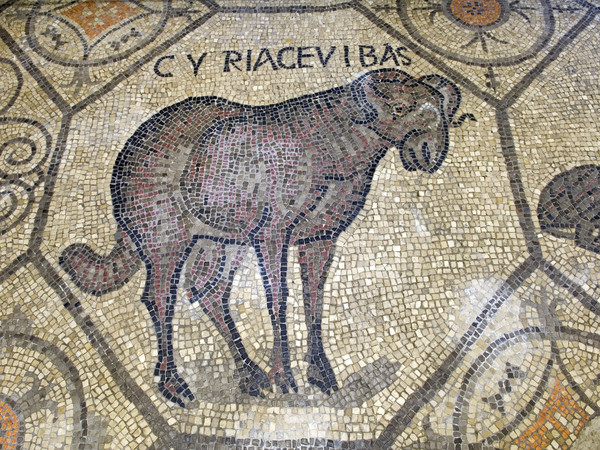 The Crypt of the archeological site of the Basilica of Aquileia. Photo by © Gianluca Baronchelli

Cock and Tortoise
The so-called “Cripta degli scavi” (Excavations crypt) was brought to light by the archaeological investigations around the bell tower just before and just after the Great War. The current covered arrangement was finished in 1920 and rebuilt in 1999. The archaeological area is dominated by the remains of Theodore’s basilica complex (dated after ad 313). This comprises the north hall, partly invaded by the bell-tower steps, the middle room with floor made of opus signinum (crushed terra cotta with lime mortar), and other structures and mosaics from both the place of worship and the bishop’s residence. At a higher level, the remains of the great post-Theodorian basilica can be seen. It was built in the mid-4th century to replace Theodore’s church, flanked by a new baptistery. In just a few decades, Theodore’s complex had become too small for the growing congregation. Accordingly, it was demolished, and a new basilica fit to meet the needs of the Aquileian Christian community arose in its stead.