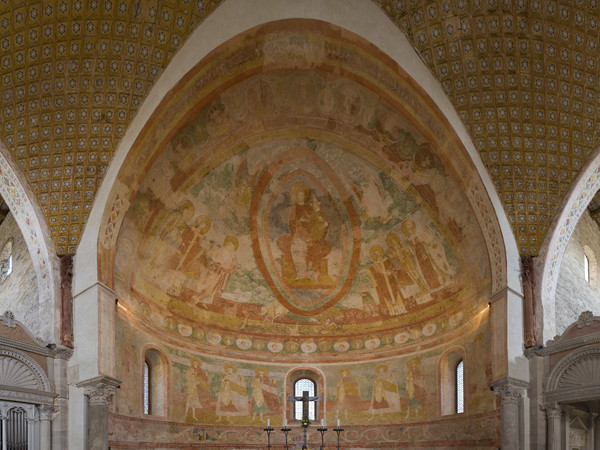 The Fresco Apsis at the Basilica of Aquileia. Photo by © Gianluca Baronchelli
The grandiose fresco in the apse is the pièce de résistance of Poppo’s creation. The lower register comprises imitation-marble panels and a band of spiral vine-tendril motifs with small birds, sandwiching the dedication inscription (which was redone in the 14th century). In the middle register, a long procession of martyr saints is presented front-on, on each side of the window. Dominating the upper order is the mandorla with the Mother of God enthroned and the Son, surrounded by the symbols of the Evangelists. In the central group, the saints of Aquileian tradition pay homage: Hermagoras (the first bishop), Fortunatus and Euphemia on the right; Mark, Hilarius and Tatian on the left. Among them appear notable figures from the imperial house and Poppo himself, offering a model of the basilica. The work was completed in the third decade of the 11th century – probably between 1028 and 1031 – and there is nothing else like it in the northern Italian painting of its time.