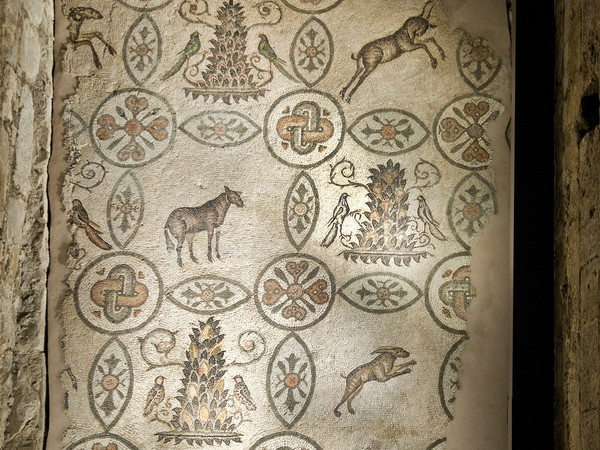 Mosaic floor in the bell tower of the Basilica of Aquileia. Photo by © Gianluca Baronchelli
In 1962, the excavation in the bell tower brought to light an interesting stratigraphic sequence of mediaeval and modern remains over the tower’s lifetime. Also unearthed was an additional portion of mosaic floor from the north hall of the place of worship in Theodore’s time (ad 313–320). Lying over a metre below the remaining floor surface because the bell tower has settled over the years, the mosaic fragment features animal figures (a goat and a hare) and clusters of plant forms with pairs of birds inside an alternating series of circles and mandorlas. After being restored and relocated in March 2012, the mosaic has recovered its former glory. The splendid plays of light in the plant forms have come alive again, and the judicious sculptural effects in the animal depictions can been seen to best effect.