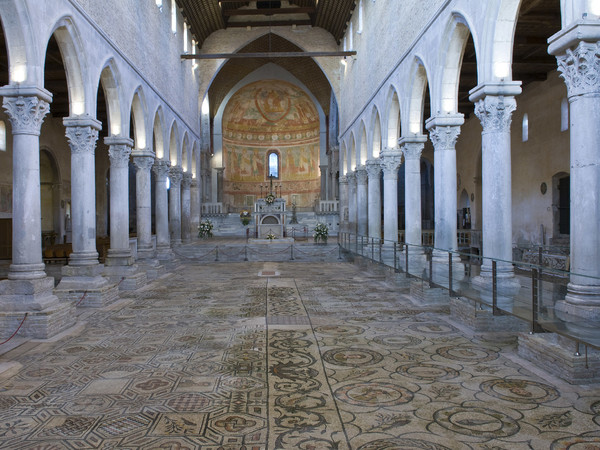 Mosaic floor of the Basilica of Aquileia. Photo by © Gianluca baronchelli

Story of Jonah
The basilica’s mosaic floor, uncovered between the end of the 19th century and the first few decades of the 20th, is one of the most spectacular relics from the primitive place of worship, built at Bishop Theodore’s behest immediately after the Edict of Toleration (ad 313). The complex comprised two parallel halls (the other can be seen in the Excavations crypt), a communicating hall, a roughly elliptical baptistery (closed to the public), and various spaces that may have belonged to the bishop’s residence. Extending over 760 square metres, the mosaic in Theodore’s south hall is the largest mosaic floor in the western Roman Empire. Divided into four spans and dominated by the inscription to Theodore, its allegories and not always easily decipherable imagery offer a practical path to eternal salvation.