Guided and evening tours by appointment

In Aquileia the domus of Tito Macro shines: five centuries of history in an unprecedented home

Samantha De Martin - 25/09/2020
A stone weight with an iron handle and an inscription that alludes to its owner: Tito Macro. And again, mosaic floors embellished with geometric patterns in black and white or with polychrome inserts, very similar in composition to the modern ones. And finally three gems, dating back to the 2nd, 3rd and 4th century AD respectively, floors depicting a deer with a dog and a fishing scene that has close stylistic correlations with the mosaics of the nearby Basilica.

An extraordinary novelty Aquileia continues to offer surprises, this time turning on the spotlight on the Domus of Tito Macro, the only Roman house entirely excavated in the ancient city founded in 181 BC and capital of the 10th Augustan region.

The innovative enhancement project that brings the environments back to life was promoted by the Aquileia Foundation and cost six million euros. "In reality - explains Cristiano Tiussi, archaeologist and director of the Aquileia Foundation - the Aquileia area has currently returned about 800 mosaic floors from homes, but we had never had the opportunity to see them all in a single living environment. And then of none of these houses we had been able to reconstruct the floor plan in its entirety ". 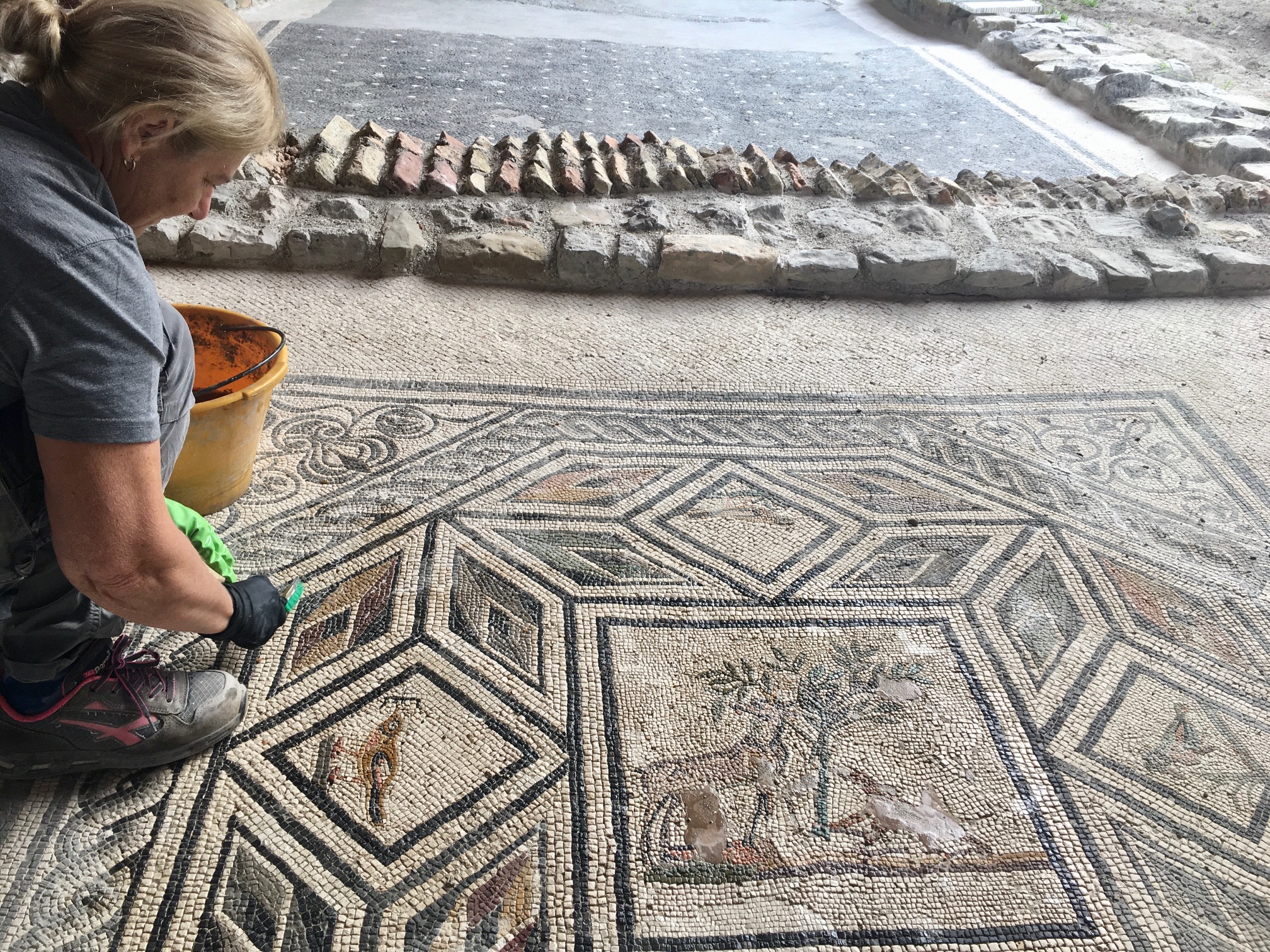 Another new element is represented by the size of the domus, which boasts an extension that has few comparisons in Italy: 1,700 square meters. To build it, the wealthy owner probably had to acquire a house adjacent to the original nucleus, comfortably creating the beautiful garden surrounded by a corridor, the large reception room, the other living rooms and dining rooms.

"Original - continues Tiussi - is also the location of the building, certainly peripheral to the city of the Republican era, but much more central than that of the first century AD, at the time of the maximum residential and building development in Aquileia. It developed between two parallel roads in a north-south direction, one of which is still visible ”.


The block was bordered to the south by the republican walls. When these were demolished at the beginning of the first century AD, the house found itself in a more central position than in the past. The original perimeter of the wall had therefore become insufficient to contain the development of the city, which has grown out of all proportion thanks to trade with the entire Mediterranean world.
The home of a wealthy merchant?
"Another new element - continues Tiussi - is represented by the fact that we know the name of the owner of the house, to which it was possible to trace thanks to the stone weight that bears his name, declined in the genitive, indicating that the object it belonged to Tito Macro. But unfortunately there is no nobility, an important name-day element that could have revealed the family to which our landlord belongs and therefore any links with the social world of Aquileia or with a specific work activity ".

Undoubtedly, he must have been a very wealthy person. "He could be a character linked to trade, who could have accumulated riches when Aquileia was experiencing a great growth at the urban level and traded with the Mediterranean and with the European continental hinterland, constituting a strategic port, the most northern of all the 'Adratico. But it is only a matter of suppositions ”.


A house that "expands"
The house of Titus Macro dates back to a period between the end of the first century BC and the first fifty years of the first century AD. Its wealthy owner would have had great transformations carried out inside. “Originally - explains the archaeologist - around the 1st century BC. there must have been a smaller house of which we disown the owner (characterized by an atrium layout, another important novelty for Aquileian archeology), which however only occupied half the width of the block. This small house would have been incorporated into the luxurious domus of Tito Macro.

The subsequent phases are marked by the changes that concern some mosaics (we are witnessing the transition from those with geometric motifs to the mosaic with the representation of the fishing scene, in the 4th century) and by new wall structures that change the layout of the interior spaces ". By now the city had grown out of all proportion thanks to its trade. Thus, when the walls were demolished, the block soon found itself in a more central position than in the past.

A 5 year long intervention
Excavations around this area had already begun in the twenties of the twentieth century and then continued in the fifties and sixties, when the area was open to the public. But the excavation concerned only a part of the domus and of the other houses close to that of Tito Macro.

Only starting from 2009, with the acquisition of a stretch of land that was private at the time, was it possible to extend the survey to the entire surface of the house. Thanks to the investigations conducted for five years by the University of Padua, under the direction of Jacopo Bonetto and his collaborators, it was possible to discover the entire extension of the house, reconstruct its physiognomy and articulation, documenting the transformations and various building phases that have followed one another. 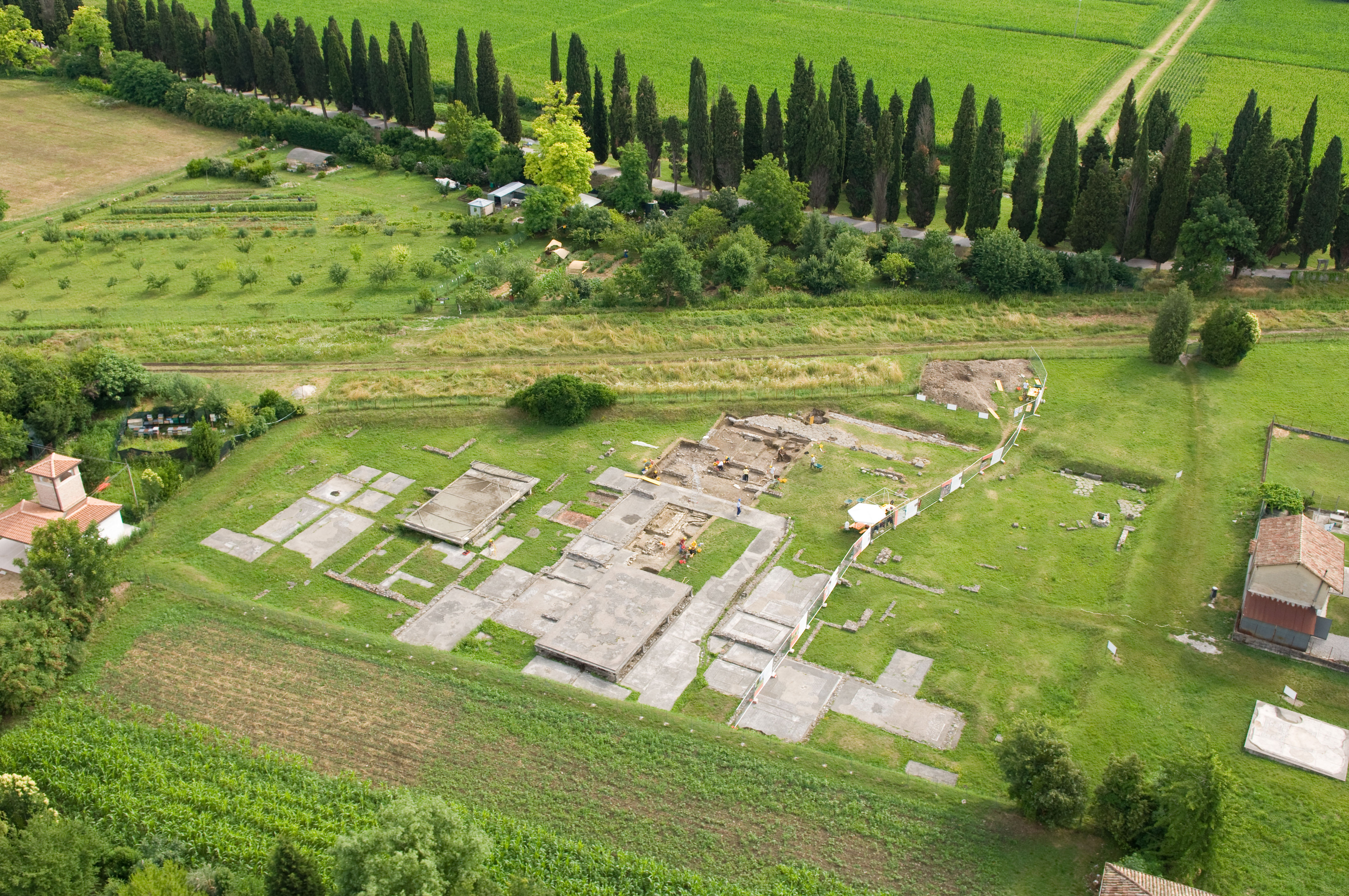 An enhancement intervention that finds few comparisons in Europe
The excavation investigations are closely linked to the protection and enhancement project that opens today, Friday 25 September, in Aquileia. “We wanted to create - explains Tiussi - a roof structure that simulates the volumes of the domus, and which finds very few comparisons in Europe. This sort of shell created to measure and which follows, and in a certain sense, the map of the house, represents for the Aquileia Foundation an important point of arrival in the activity of protection and enhancement ".

And in fact the new case, an elegant and modern roof in monochrome brick supported by steel pillars in Pompeian red, not only enhances the finds of the house, but allows visitors to admire the mosaics, sheltering from the sun and bad weather. This intervention in the archaeological area of the Cossar funds allows visitors to appreciate the articulation of the large Roman house, the articulation of its rooms, the refinement of the mosaic floors. The project was carried out not only with regional funding from the Aquileia Foundation, but also thanks to an important contribution from ALES Arte Lavoro e Servizi, an in-house company of the Italian Ministry for Cultural Heritage. 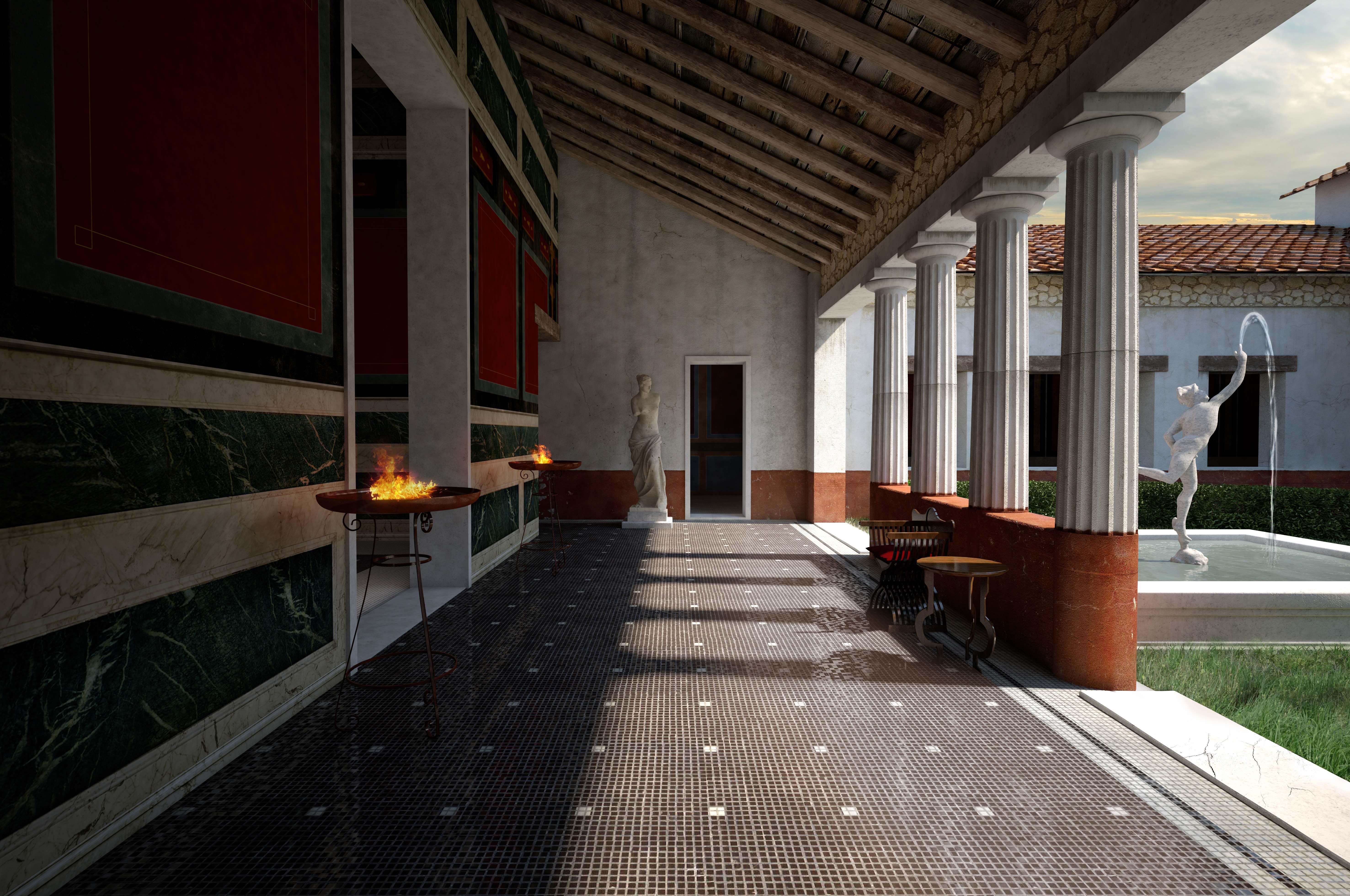 
Making the finds "talking" through multimedia: the objectives of the Aquileia Foundation
"The enhancement of Tito Macro's Domus - explains Ambassador Antonio Zanardi Landi, president of the Aquileia Foundation until October 2020 - represents an important point of a path that the Aquileia Foundation has been following for some time, in order to achieve better usability of the remains of the great Roman city. The goal is to make the archaeological finds and the great works of art preserved in Aquileia 'talking', helping understanding in the highly original context of a city that was the meeting point of Roman times with the Balkan world and with the North African and Middle Eastern world " . Soon there will be other news in Aquileia.

"The protection and enhancement of Tito Macro's domus - anticipates Cristiano Tiussi - is a very important point of arrival that pushes us to consider other outdoor areas, such as that of the Forum and the River Port, in which we will try to to make the remains 'talk'. An enhancement and remodeling of the routes will allow us to attract new visitors to Aquileia, making the meaning of these structures and their original conformation more transparent through multimedia ". 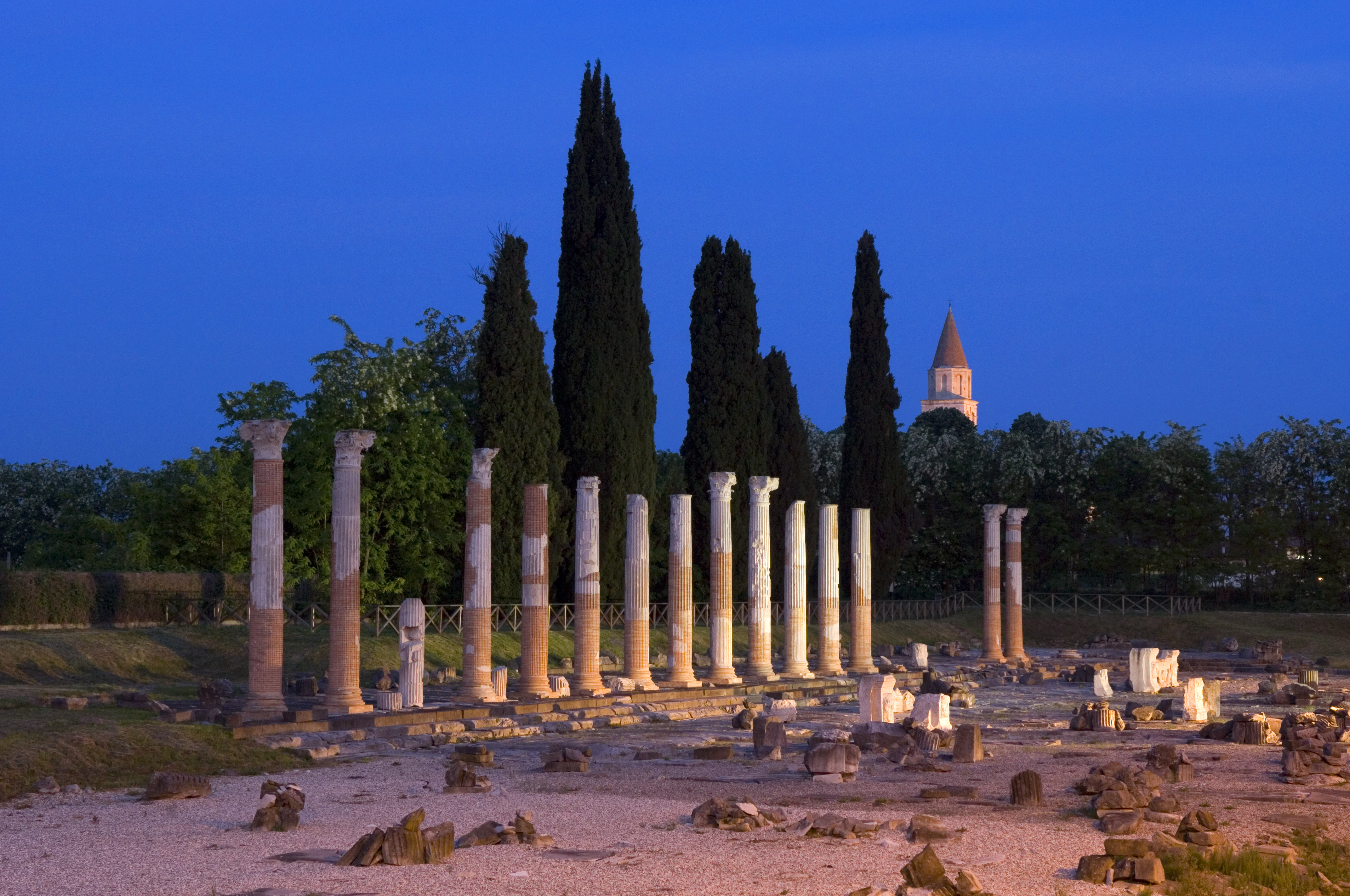