National Archaeological Museum of Aquileia | Photo: © Gianluca Baronchelli
E. Za. - 17/03/2022
Around the end of the 1st century BC, Augustus decided to base himself in Aquileia. It was a strategic place to closely follow the military actions aimed at keeping under control the turbulent situation caused by the populations of the Illyrians, Pannonians, Iapodians and Liburnian pirates.

At that time, the Emperor's number one concern was to secure the northeastern territories of the peninsula. The decision to found new centers such as Tricesimum, Forum Iulii (Cividale), Iulium Carnicum (Zuglio) was also part of the same plan.

Aquileia enjoyed a key position, but evidently also had the characteristics suitable to accommodate the imperial family. For this it was chosen as a base by Augustus who continued for the entire period of his stay to manage public and diplomatic matters.
These were the years in which Aquileia thus became the beating heart of the life of the Empire.

Important personalities come to visit the city. Such as Herod the Great. He had faced a long journey to be able to meet Augusto.

The king of Judea was tormented by the suspicion of a conspiracy by his sons against him and wanted to ask Augustus for an opinion, perhaps some help. In that same period, the future emperor Tiberius also visited Aquileia with his new wife, Giulia. 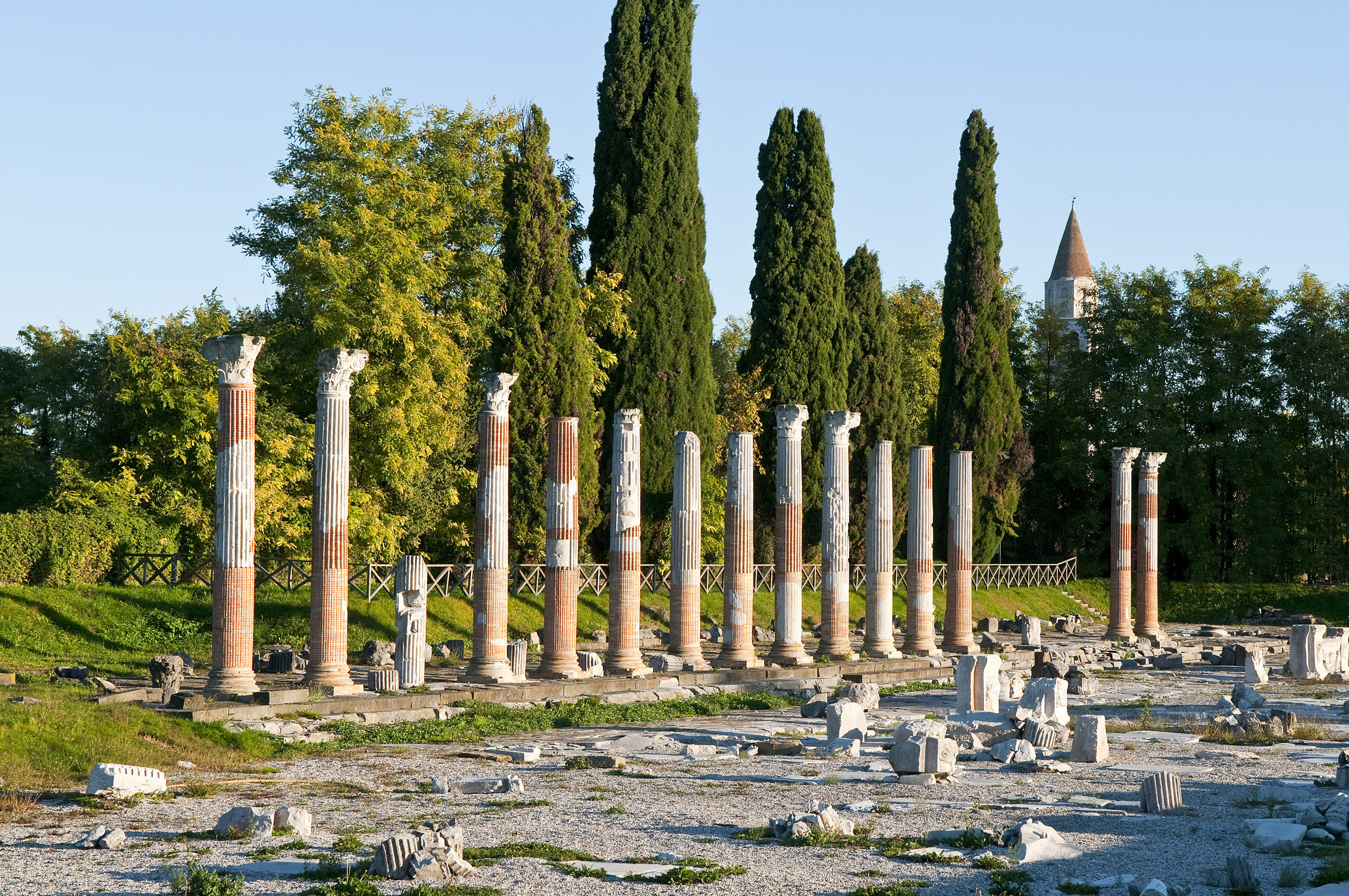 The columns of the Forum, Archaeological Area of Aquileia | Photo: © Gianluca Baronchelli

Undoubtedly, the arrival of Augustus in Aquileia had set in motion a series of renovations of the city to make it equal to the new role. The interventions were concentrated in the area of ​​the Forum which housed the structures responsible for political and administrative activities.
From that time we know the name of the main family of builders who followed most of the building interventions around the Forum in the early imperial period: the Aratrii. They were originally from Aquino and were known brick producers since the late Republican period. As it is easy to guess, the presence of the imperial family attracted the most qualified artisan workshops (sculpture, gems, toreutics, painting) to Aquileia, meeting the needs of an exceptional client.

At that time the heart of the public and administrative life of the city was the Basilica, located at the end of the southern side of the Piazza del Foro, bordered by long arcades. Their decoration with the heads of Jupiter Ammon and Medusa, applied on protruding blocks between plates of balustrade with garlands held by eagles and cupids, refers to the decorations of the porticoes of the Roman Forum. 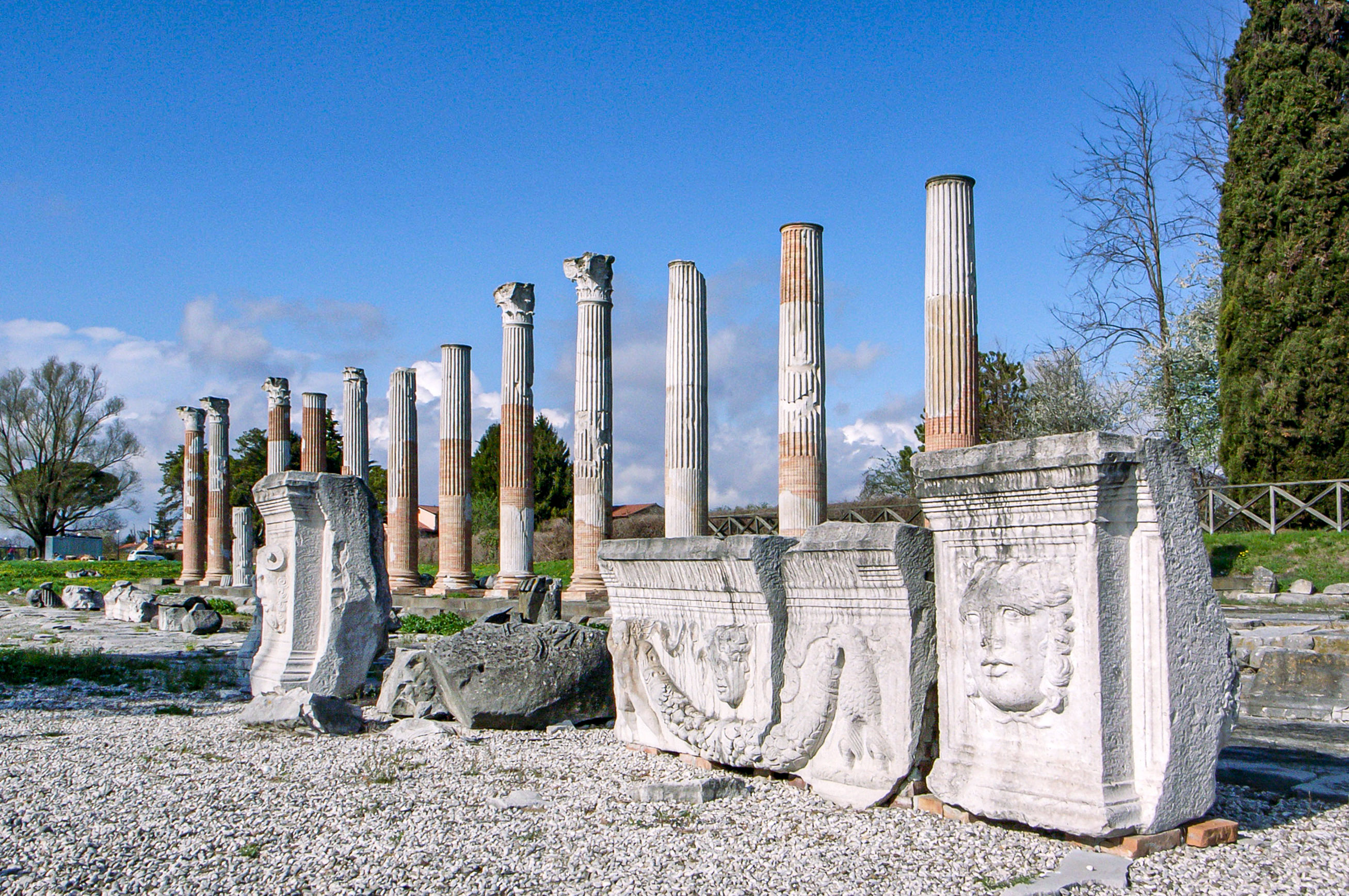 Cycle of Jupiter Ammon and Medusa at the Forum of Aquileia | Photo: © Gianluca Baronchelli

Unfortunately, there is no evidence of the Augustan basilica of Aquileia. The building was rebuilt towards the end of the second century AD, when the eastern portico of the Forum was also rebuilt.

One of the most significant forms of imperial propaganda was constituted by the statuary cycles displayed in buildings of the imperial cult or within public structures, especially in basilicas.
In Aquileia, sculptures depicting members of the imperial family have survived a very large statue, more than 2 meters high, which depicted Augusto capita veiled, a female statue, perhaps Livia, a head of Tiberius and one of Claudius.

It was probably linked to the first emperor and probably also to his successor, the important building complex that was unearthed in the 1920s in the southern area of ​​Aquileia and which goes by the name of Small Urban Baths.
According to some scholars, and thanks to the findings of high quality materials, it would be the home of the Augustus family. In particular, some architectural terracottas were found obtained from matrices used in contexts owned by the imperial family, both on the Palatine Hill and in the villa of Livia in Prima Porta. 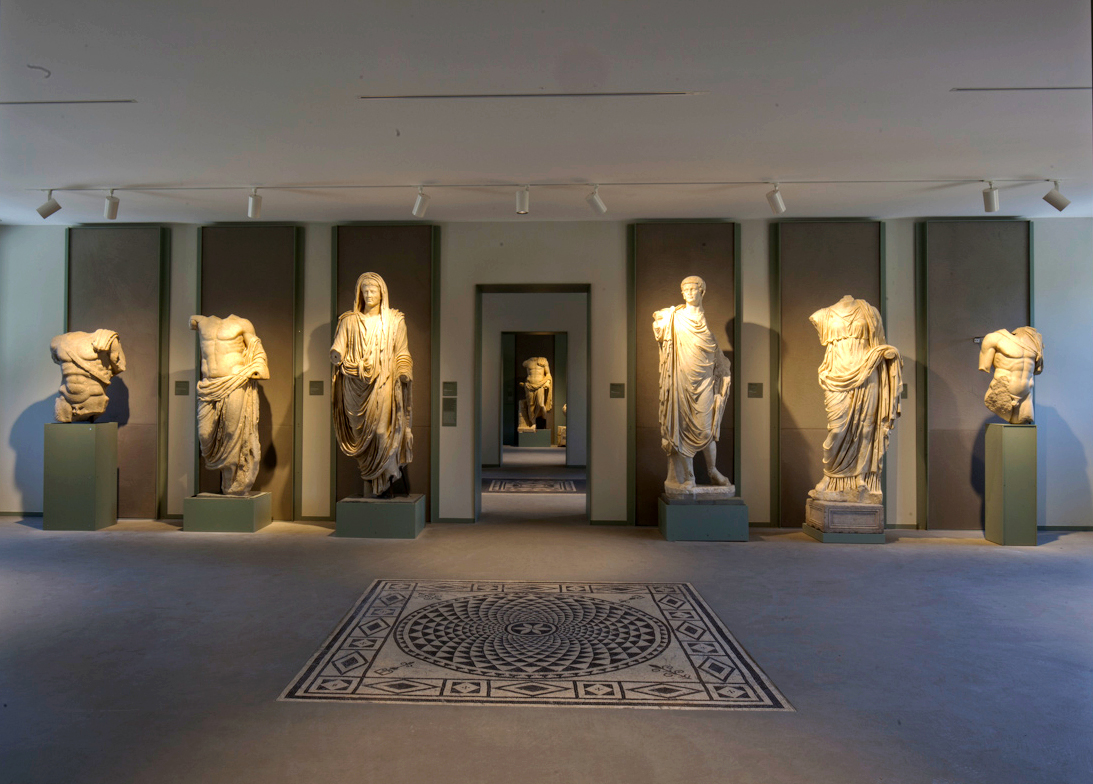